Last year I participated in children’s author Julie Hedlund’s 12 Days of Christmas for Writers series. She challenges participants to post SUCCESSES (rather than resolutions), believing the way New Year’s resolutions are traditionally made come from a place of negativity – what DIDN’T get done or achieved in the previous year. Instead, she suggests we set goals for the New Year that BUILD on our achievements from the previous one. I felt good about what all I accomplished last year so I decided to participate in this Anti-Resolution Revolution again. It really helps for when someone kindly asks: “Anything new with the writing?” and I give a hesitant “no…”

January: I didn’t make it into the Writing with the Stars mentorship or Sun vs. Snow, but I did join an online picture book critique group with five fabulous writers, who have proven to be invaluable. I can’t imagine submitting something without their critiques. I was also featured on Sub It Club’s blog for winning their “Small Steps to Success” contest. And I came up with 30 picture book ideas in 31 days thanks to Tara Lazar’s STORYSTORM. Submissions: 1 MG ms, 5 subs; 1 PB ms, 3 subs

February: I joined the picture book debut group, Newin19, for Sassafras and have learned SO MUCH (and how much I still have left to learn, gulp!). I was also encouraged to create an Amazon Authors page which made me feel pretty legit. I wrote another Bean & Jilly entry for Susanna Hill’s ValenTINY contest, and while I didn’t place, I hope to one day expand it into a chapter book. Submissions: 1 article, 1 sub; 2 PBs, 4 subs

March: Fireflies & Fairy Dust published 2 poems and 1 flash fiction piece of mine, and our local Mobile Writers’ Guild published our first ever anthology which had one of my poems, and 2 of my short stories in it, one being a story I co-wrote. I manned a table at the Mobile Literary Festival which was exciting to be a part of. Also got an agent #PitMad request. Submissions: 2 articles, 2 subs; 1 MG, 1 sub; 1 YA, 1 sub; 3 PBs, 3 subs

July: I sent my resume to 2 educational publishers as a Writer-For-Hire. Submissions: 1 MG, 1 sub; 1 PB, 1 sub

September: I spent this month revising the mss from Study Hall critiques, and received a full agent request on my MG magical realism. My picture book critique group and I launched our brand new blog, Wonder of Words!

October: I participated in my 1st ever twitter chat hosted by Matthew Winner with the Newin19 debut group, and did my 1st public reading at a local indie bookshop’s grand opening! Owl Hollow Press published my short story “Swamp Mallow” in their anthology and I really, really just love Halloween. The poem I submitted to Susanna Hill’s HalloWEENSIE contest didn’t place but I expanded it to a prose PB ms that I am absolutely in love with and hope to start querying in the new year. Submissions: 1 PB, 1 sub 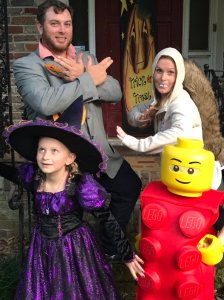 November: For my birthday, my super supportive parents gave me Callie Metler-Smith’s Writing Magic Lab so I can focus on one of my MGs. Submissions: 2 PBs, 2 subs

December: Pretty much shocked that this month is almost over. I read one of my Christmas poems at the Mobile Writers’ Guild Christmas party and was pleasantly surprised at the applause, lol. My picture book manuscript “Little Oak” won Honorable Mention in the Writing Magic Holiday contest. I decided to invest in myself and used Christmas money to enroll in the Children’s Book Academy workshop in the New Year. Super excited for that! Submissions: 1 poem, 1 sub

So maybe there is ‘something new’ with my writing. Laying out my accomplishments like this helps me see how my writing has grown this year. Maybe next time I won’t answer the question with a hesitant no.

I encourage you to do the same!

Today’s rain has me in a Gothic reading mood and what’s a wild weekend without Eliza Melling’s shenanigans?
One of my favorite bonds in books are sisters, or friends that feel like sisters, so when I wrote The Existence of Bea Pearl, I wrote Bea as her against the world, but with a best friend who has her back in whatever situation she finds herself. Honey may not alway completely agree with Bea’s methods of uncovering the truth that seems buried under a muddy river bottom, but she’ll have a shovel in her trunk just in case. 😉
Day 7 of #authorlifemonth2021: #shelfie!
Our Easter was turtley bee-utiful. Even eggsceptional, I’d say 🐢🐝🥂🥚
My writing is fueled by coffee on a daily basis; but the soul, from where those words come, is fueled by this.
Since I posted about my book yesterday, I figured the Universe was nudging me to participate in @missdahlelama ‘s #authorlifemonth IG challenge.

The Wildness in Mellie Feye

Reading from the bottom up📚✨

Writer In The desert

haunted by the ghosts of all great literature

Where the magic of math and writing comes together!

The Wonder of Words

Sharing Information About Writing and Illustrating for Children

Writing for Kids (While Raising Them)

"There is no greater agony than bearing an untold story inside you.” ― Maya Angelou, I Know Why the Caged Bird Sings